Many parents today turn to computers, tablets and other electronic devices as a means to keep their kids entertained and occupied. There’s no cleanup, and kids can remain quiet for hours on end as you do the dishes, wipe the dust and even have some time for yourself. Sounds like a fairytale, right? 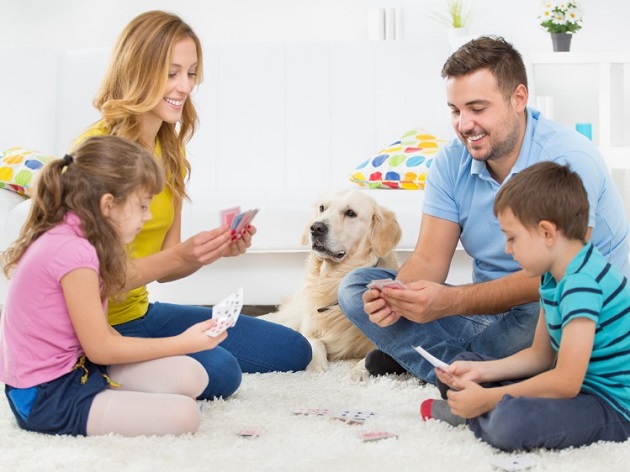 Even though technology can be educational when used the right way, parents must be aware of the side effects of too much screen time. Growing data suggests that spending too much time in front of a TV or computer can negatively affect children’s development, including causing problems with memory, attention and speech.

But there are many alternatives to screens that can keep children entertained without any harmful effects. For instance, something as simple as a deck of cards can provide hours of fun. In addition, card games can keep children’s minds active, encourage concentration, promote socializing and teach them basic math skills and how not to be a sore loser. And all of these things are crucial factors for a happy and healthy life. So if you want your child to be more engaged in activities that are fun and educational at the same time, there’s an unlimited number of games that feature a deck of cards, like for instance. 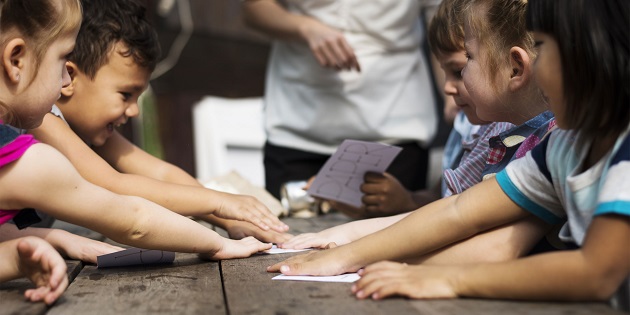 When people ask me what are some fun card games for kids, Uno immediately comes to mind. I have yet to meet a person who hasn’t played Uno as a kid. After all, is there any other family game that’s as competitive and thrilling as Uno

? Considering how many cards in Uno game there are (108!), every round is completely unpredictable and everyone has an equal chance of winning. But even though a deck of Uno has so many cards, the rules of the game are easy to master for every kid that knows how to count to nine. Plus, since it can be played with 2-7 players, in most cases, everyone in the family can join in.

The standard Uno deck consists of 76 cards numbered from 0 – 9, 14 action cards and 8 wild cards. All cards are separated into four colour suits: red, yellow, blue and green. The goal of each player is to be the first one who has got rid off all the cards in their hand. When you have one card left, you need to shout “Uno” or receive a penalty by being given extra cards. There are also other versions of Uno that come with their own exciting twists, such as Uno Flip, Uno Dare and Uno Stacko. 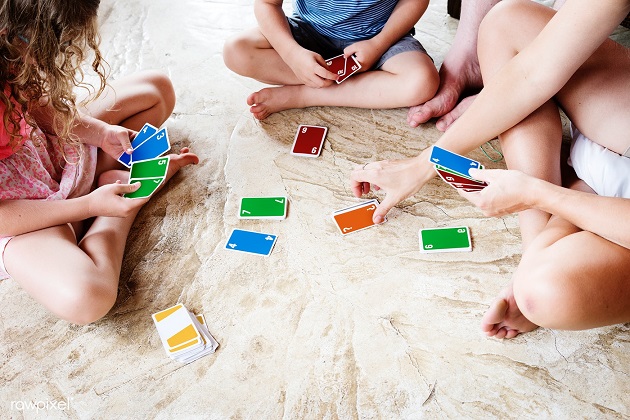 Skip Bo is another game people love because it can be played easily by children and adults alike. So, how do you play Skip Bo card game? Well, it’s quite similar to Uno with the aim of the game is to be the first one to play all of the cards in your hand. However, it has more cards than Uno (162) and requires to invest more forethought as there are extra rules, such as building piles of cards in a 1-12 sequence according to colour. Due to the number of cards and the piles, this game also needs to be played in a bigger space, usually a large round table or on the floor. This game is a great alternative to Uno, if you want to keep children occupied for longer.

Exploding Kittens is a game designed for ages 7 and up. Despite being created by The Oatmeal, all the cards in the standard edition are kid-friendly and safe-for-work. When it comes to teaching kids how to play Exploding Kittens, the rules are very simple. Plus, there are instructions on every card to make things even easier. You put the deck of cards on the table and take turn drawing from them. If you draw an exploding kitten, you’re out of the game. But you can save yourself by using a defuse card that can stop the kitten from exploding.

There are also various cards that allow you to skip your turn, attack other players, take a peek at the deck or secretly relocate an exploding kitten card. As you can see, the goal is to be the last one standing. It’s a very easy and fun game for everyone to jump into and play. In general, a round of Exploding Kittens lasts between 10 to 20 minutes which is great for young children who have shorter attention spans. The instructions on the cards are hilarious which makes this game a popular choice for family game nights.

Apples to apples is a fun game that should be in everyone’s collection, but if you don’t have it already – go get a copy, your kids will love it. This game can be played with 4 to 10 players. The more players, the fun the game gets. Each round has a player acting as a judge. The judge picks a green apple card, reads the word aloud and places it on the table face up. The players then need to choose what card in their hand can be best described by the word and place it face down on the table.

The judge takes the cards, mixes them and then turns each over to select which one is best described by the word on the green apple card. The player that selected the chosen card, is awarded the green apple card and proceeds to act as the judge next. This game requires players to keep score how many times they’ve received the green card. How many green apple cars are needed to win depends on the number of players.